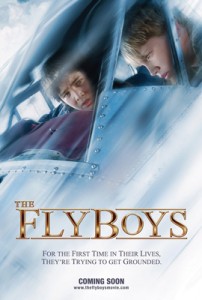 The Flyboys was filmed in St. George

“The Flyboys” is one of the movies filmed in St.George.  Those who know St. George well will recognize many of the areas downtown buildings and landmarks. The Best Western Coral Hills accommodated much of the film crew during the filming of this movie.  Recently there was a limited release viewing to the St. George Area
About the Movie:
Jason and Kyle, recent friends from different sides of the track, become embroiled in the adventure of their lives when they discover a mysterious airplane at the local small-town airport. The boys sneak aboard the plane for a look, but are forced to hide in the luggage compartment when two strange men show up. Soon Jason and Kyle unexpectedly find themselves airborne over the open Arizona desert. After hours in the air, the boys unwittingly uncover a bomb in the luggage compartment. When they burst into the cabin to report their discovery, they find that everyone on board has bailed out. The boys must take the controls and land the plane themselves. But their troubles are only beginning as Jason and Kyle realize that they’ve foiled a heist to steal millions of dollars from the mob in this high-action, coming-of-age film.