July 24th is Pioneer Day and a Utah state holiday.  REMEMBER that banks and government offices will be closed. It commemorate the entry of Brigham Young and the first group of Mormon pioneers into Utah’s Salt Lake Valley in 1847. This day celebrates the bravery of the original settlers and their strength of character and physical endurance.

This day commemorates the entry of Brigham Young and the first group of Mormon pioneers into Utah’s Salt Lake Valley on July 24, 1847. The Mormon pioneers viewed their arrival as the founding of a Mormon homeland, hence Pioneer Day. The Mormons, as they were commonly known, left their settlement in Nauvoo, Illinois, and journeyed west seeking refuge from religious persecution. The final impetus for their trek was the murder of founder and prophet Joseph Smith on June 27, 1844.
Determined to settle in an isolated region, the pioneers made their way across the plains and over the Rocky Mountains to Utah. They lost many of their party to disease during the winter months. By the time that they reached Utah, the desolate valley was a welcome sight. Potatoes and turnips were soon planted, and a dam was built. With solemn ceremonies, the settlers consecrated the two-square-mile city, and sent back word that the “promised land” was found. By the end of 1847, nearly 2000 Mormons settled in the Salt Lake Valley. The first Pioneer Day was celebrated in 1849 with a parade, band music and speeches. In modern times July 24 is celebrated annually as Pioneer Day, a state holiday, in Utah. 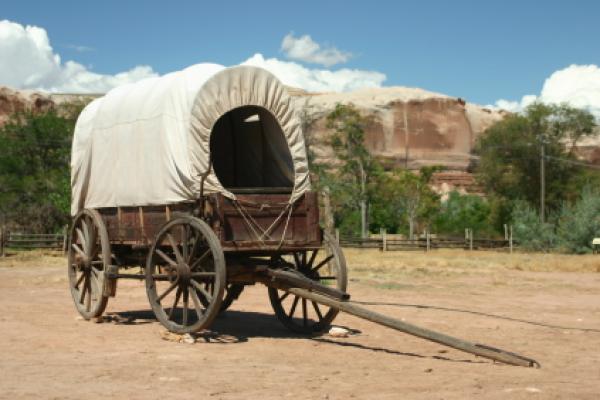