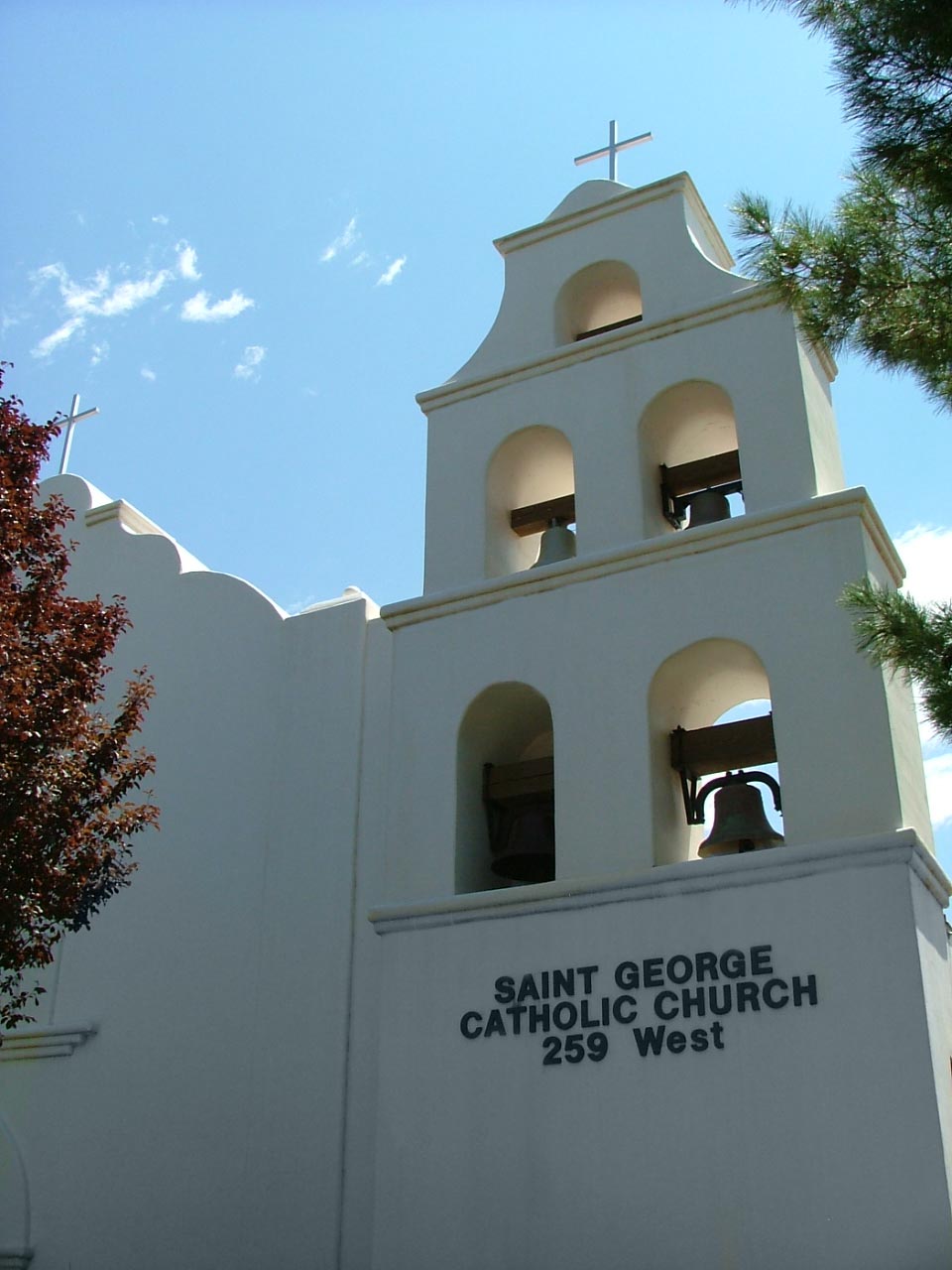 
From the Washington County Historical Society:
In 1879, Father Lawrence Scanlan  established the St. John’s Catholic Church,  the Silver Reef Hospital,  and St. Mary’s School in Silver Reef.  At the invitation of his friend, John MacFarlane, a deputy U.S. mineral surveyor at Silver Reef,  Father Scanlan offered mass in the newly completed St. George Tabernacle.  The St. George Tabernacle choir sang and three thousand people attended the mass.  This was the first high mass celebrated in southern Utah.
In 1951, Bishop Hunt of the Salt Lake City Diocese of the Catholic Church purchased the old   Presbyterian Church and property.  For several years, the small chapel in this structure was used for mass.
The historic building was remodeled in 1958 to serve as a church with an adjoining rectory.  It was dedicated by Bishop Federal on June 8, 1958.
The St. George Parish was formally established in 1958.  It was administered jointly with Christ the King Parish in Cedar City,  since neither parish was large enough to accommodate a full-time priest.  Though there was only one resident Catholic family in St. George in 1958,  the church there served the needs of the influx of tourists during summer months.  They also cared to missions in Enterprise and Zion National Park.
In the 1970s, fifteen Catholic families were registered  at the church/rectory duplex on Main Street in St. George.  The resident pastor of Cedar City provided pastoral care throughout Washington County.
In 1979, under the supervision of John Lanham of Dammeron Valley,  the church was renovated and expanded to double the seating capacity.  Local residents paid the cost by raising $25,000,  and the Catholic Church Extension Society also assisted the project.
In 1981, landscaping was completed and an addition was made to the rectory  by contractors Jim Martin and Sal Grillo.
Also in 1981, two Holy Cross Sisters served as pastoral associates  to the five parishes in the Southwestern Deanery  of the Salt Lake Diocese and visited St. George regularly.
The St. George Parish received its first full-time priest in 1983.  Father James M. Greenwell (administrator of the parish from late 1980 to 1983)  served as the first full-time pastor during the year 1983.  He was also administrator of St. Christopher Parish in Kanab  during that year until Father Anthony Vollmer CPpS was named pastor there.
The Father Paul S. Kuzy CPpS became pastor in 1984.  At this time, there were 150 Catholic families and well over 250 members.  He also served Zion National Park as a station of the St. George Parish,   offering mass in the lodge there weekly from May through September.  During this time, a parish council was formed, a Newman Club  was started at Dixie College, and a parish thrift shop was opened.  Father Kuzy served until his death in the spring of 1997.
The old church building was torn down in 1990.  A new and larger white stucco Spanish-style building was constructed on the site in 1991.  That building with attached hall and offices was dedicated July 14, 1991 by Bishop Weigand.
A new social hall was dedicated December 14, 1995 by Bishop Niederauer,  and later named Kuzy Hall for the beloved pastor who died in 1997.  The church was then expanded to include the section previously used as a parish hall.
In 1998, the Metcalf property was purchased as a rectory.  The old rectory was demolished in 2003 and in 2005 the recently purchased rectory was renovated.
On March 13, 2005, Bishop Niederauer dedicated the new Bishop Scanlan Catholic Center,  which housed a large thrift store, parish classrooms, and offices.  Surrounding homes had been purchase to provide space for the expansion and required parking.
The present parish in St. George serves some 1,800 families  and also gathers people in Hurricane for mass, prayer, and socializing.
The future:
During the 1990s, with the assistance of benefactors as well as the Diocesan Development Drive,  the diocese purchased property at Washington City on the east side of St. George for a future church.  They also acquired ten acres in Hurricane, where the local Catholics have organized a thrift store  to begin raising funds for a church there at some future date.  In 2007 the diocese purchased property in the areas of Southgate and Ivins.